While the economy still has room to improve and is not yet at full employment, it is undoubtedly the strongest in a decade. The non-employment rate, the broadest measure of labour market health, has finally returned to pre-recession levels. This progress is good news for the online workforce. 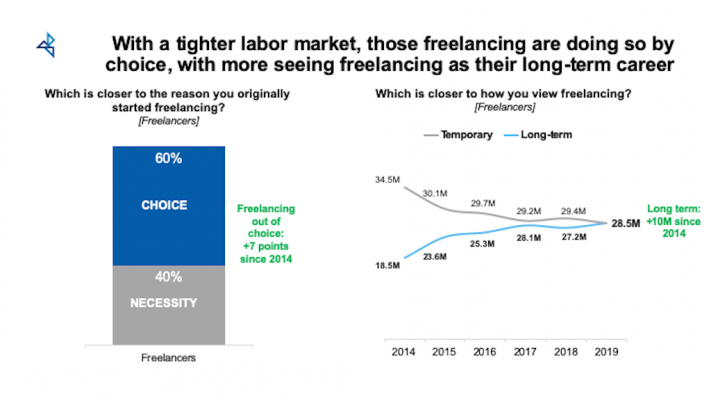 Overall, a more robust economy means more options for all workers. As a result, for the first time since FIA began in 2014, some as many freelancers view freelancing as a long-term career choice. For comparison, in 2014, nearly twice as many viewed their freelance work as a temporary choice rather than a long-term one.

This shift in the freelance economy from temporary to long-term reflects a broader pattern of change underway. As the economy heals, some types of freelancing are growing while others are shrinking. Specifically, the more robust economy reduces the number of freelancers participating part-time, those doing it temporarily and those who freelance only occasionally throughout the year. In contrast, in addition to an all-time high for the number freelancing as a long-term choice, a growing number are freelancing daily.

The INNERface DIGITAL ON DEMAND services give you a full-stack digital marketing agency at your fingertips. Hire any number of our professionals with the convenience of By-The-Minute billing. Hire Our Team Today and Take Your Project to the Next Level.